Three weeks ago, my new car took a smack to the righthand passenger side, thankfully empty. Totaled? Did it matter? A car is a thing. I walked away.

The following hours passed procedurally—insurance conversations, a tow truck haul, the arrival of my rental car, and my automatic pilot duty to reach work to fulfill a deadline.

I went through the motions but without razor-sharp clarity. Yet my system remained in a certain overdrive.

The power of the word STOP

Noticing my vulnerability, a wise colleague suggested that I stop by a clinic. STOP. Now that’s a darn great verb.

The doctor checked my body for soreness and my brain for concussion. On detecting my Alabama accent, he regaled me with a couple of anecdotes about the delightful time he experienced while training in Charleston, South Carolina, quite the lady by the sea.

But on a serious note, he warned me that a few days of rest were essential because my brain had experienced a jolt. Prescription:

What’s up with my brain?

After resting a few days, I awoke early one morning, pondering the brain—among the most complex organs in our body, “with 100 billion nerves that communicate in trillions of connections called synapses,” according to WebMD.

What did I really understand about this headful of miracles? So I took a small voyage of discovery via a quiz posted last year on WebMD: “How well do you know your brain?”

How did I score? “Not bad.” However, the grade would have vexed my professors of general-ed “baby bio” courses. Clearly, I had a bit to review.

Although an on/off practitioner of yoga since college, I finally sought consistency. Six months ago, I rooted in a daily practice (a.m. and p.m.) followed by a few minutes of meditation. However, on the day of my accident, I rushed out the door without pausing for this routine, diverted by having slept through my alarm.

Again, I return to the cautionary STOP. Would grounding my being for a few extra minutes have prevented the accident?

The myths of life/work balance and multitasking

For two weeks, I slowed down my internet activity, taking a Twitter vacation and almost disappearing from Facebook and its political fallout—but dropped in on LinkedIn where I regularly engage colleagues and school friends from days of yore. However, detaching periodically from the life/work email streams proved challenging.

In 2011, I read the article “Who’s the Boss, You or Your Gadget?” in the New York Times. This passage addresses the constant contact with work via smart phones, text messaging, and social media: “There’s a palpable sense ‘that home has invaded work and work has invaded home, and the boundary is likely never to be restored,’ says Lee Rainie, director of the Pew Research Center’s Internet and American Life Project.”

For many, “life/work balance” is an empty phrase. Psychologists have long dismissed the notion of multitasking.

Imagine how much a general invasion has amped up in the past six years. Now we binge-watch hot series via gadget streaming, and presidential policies blast us in tweets.

Did empathy go down a rabbit hole?

The debate about gadgets and their effect on empathy continues. In 2014—appropriately on February 14—an article in Wired gave me pause. “How Gadgets Ruin Relationships and Corrupt Emotions.” A salient point on “cell-fishness” follows: “But this is about more than an issue of gadget etiquette or a lack of consideration for others. It’s about connection. While our electronic gadgetry is keeping us more connected in some ways, it is a shallow connection — not the deep emotional engagement needed for any kind of meaningful relationship.”

About six months ago, an article appeared in TechCrunch: “The New Age of Empathy.” It has a decidedly different take on empathy: “The best books, the books that stay with us, are tinged with both comedy and sorrow, humor and anger. We remember things that make us feel. The internet, in its petulant and infantile glory, is slowly moving toward that ideal.” The article also underlines several studies that the internet can stimulate brain activity and that time spent online has little impact on empathy.

However, the piece ends on a question mark: “In the end, this new era of empathy might be a mirage, a calm before the dystopian storm. Or it could be a signpost aiming us forward, unto higher heights and better worlds. The answer is within us and how we choose to react in this moment. We are the ones who take the darkened hill and shout ‘Excelsior’ [‘always upward’ in Latin]. The internet is the lantern in our hands.” 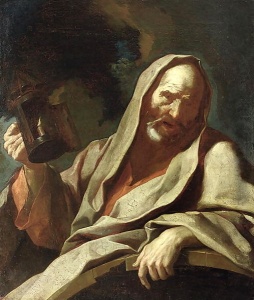 Lantern? What popped into my mind was the cynical, albeit grumpy, Greek philosopher Diogenes (c. 404-323 BCE). He’s the fabled fellow who wandered around the marketplace, thrusting a light in the faces of passersby in search of an “honest man.” In modern terms, that might translate to a true (or authentic) human being. (What pesky comment would Diogenes have delivered in the face of “alternative facts”?)

Admittedly, this dude had guts. When Alexander the Great (tutored by Aristotle) showed up in Corinth, he curiously sought out Diogenes, who reclined in the sunlight. After introducing himself, Alexander asked whether he might offer a favor.

Diogenes did not miss a beat, “Yes. Get out of my sunlight.”

Alexander was all praise: “If I were not Alexander, I would wish to be Diogenes.”

Diogenes did not miss a beat: “If I were not Diogenes, I would also wish to be Diogenes.”

Thanks for dropping by. I welcome your comments! Cancel reply

Soul deep storyteller, poet, copywriter, and editor with a passion for wordplay, the South, gardens, and literature

Poem excerpt: "My Father on D-Day: Why Do You Ask This?" My parents and I traveled to Utah Beach on a gray, wind-swept day in September 1994. My dad was last there on June 6, 1944. He was 18—a pharmacist’s mate assigned to an LST, attending to the wounded and removing them, and the dead, from the beach. He found his soul, and profession, on that fateful day. #poem #normandy #normandybeach #worldwar2 #poetry #gratitude

My other blog: Catherine Hamrick

Considering a Communications Career? 10 Questions to Ask Yourself